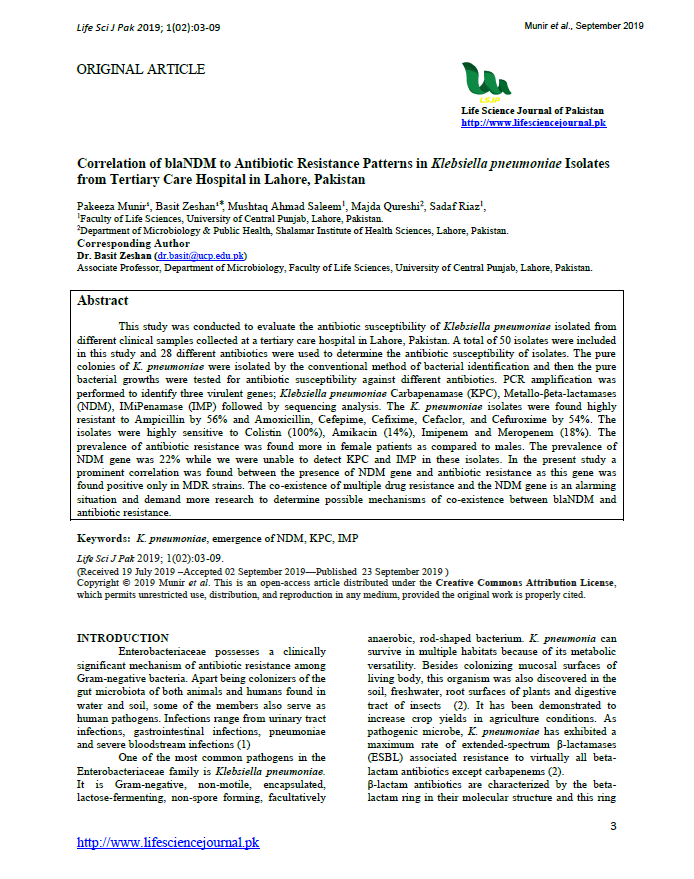 This study was conducted to evaluate the antibiotic susceptibility of Klebsiella pneumoniae isolated from different clinical samples collected at a Tertiary Care Hospital in Lahore, Pakistan. A total of 50 isolates were included in this study and 28 different antibiotics were used to determine the antibiotic susceptibility of isolates. The pure colonies of K. pneumoniae were isolated by conventional method of bacterial identification and then the pure bacterial growths were tested for antibiotic susceptibility against different antibiotics. PCR amplification was performed to identify three virulent genes; Klebsiella pneumoniae Carbapenamase (KPC), Metallo-β-lactamases (NDM), Imipenamase (IMP) followed by sequencing analysis. The K. pneumoniae isolates were found highly resistant to Ampicillin by 56% and Amoxicillin, Cefepime, Cefixime, Cefaclor, and Cefuroxime by 54%. The isolates were highly sensitive to Colistin (100%), Amikacin (14%), Imipenem and Meropenem (18%). The prevalence of antibiotic resistance was found more in female patients as compared to males. The prevalence of NDM gene was 22% while we were unable to detect KPC and IMP in these isolates. In the present study, a prominent correlation was found between the presence of NDM gene and antibiotic resistance as this gene was found positive only in MDR strains. The co-existence of multiple drug resistance and the NDM gene is an alarming situation and demand more research to determine possible mechanism of co-existence between blaNDM and antibiotic resistance.